Start a Wiki
Anna Nishikinomiya (アンナ・錦ノ宮 Nishikinomiya Anna) is a character appearing in the Shimoneta series. She is the president of the student council and the childhood love of Tanukichi Okuma that has commissioned her to hunt "Blue Snow" before she can endanger the morale of the school.

Anna is an extremely beautiful and attractive clear-skinned girl with silver hair, teal-blue eyes and large breasts. The PM around her neck resembles a snowflake.

Anna is a responsible person and student council president. Despite her status, she has been shown to be quite naive and clueless when it comes to lewd materials, due. However, when it comes to Tanukichi Okuma, after they accidentally share a first kiss, she attempts to rape him to collect his "love nectar", which is shown throughout the series progressively. She can be very obsessive over him at times, which is also shown a lot throughout the series. She claims that this obsession is love, and that everything committed out of love is an act of justice. Ayame points out that, in reality, Anna may not be capable of distinguishing between love and lust.

She also possesses a "yandere" personality. This is shown when she held Ayame Kajou with scissors to her throat when she noticed how much time Ayame and Tanukichi spent together. Also, when she breaks in into Tanukichi's apartment and saw Kosuri Onigashira sleeping next to Tanukichi, she stabbed a knife multiple times "five finger fillet" style around Kosuri. This shows that Anna is a troubled person.

Anna seems to have incredibly agile fighting techniques which can be shown whilst chasing after Blue Snow/Tundra and Tanukichi Okuma. She is shown to be incredibly strong in multiple episodes, can climb along cables, and survive a drop from a cable car. She can also deliver a kick that can stop any person running towards her.

Perhaps her most signature trait is her unique and unheard of ability to miraculously secrete an insane amount of "love nectar" - a substance she produces from a special area. This happens when she is under any form of sexual arousal, and when she is, she releases this fluid at inhumane levels.

"Why does my body feel so hot?" - Anna after kissing Tanukichi Okuma by accident and she begins to lust after him.

"After all, this is love." - After trying to stab Kosuri Onigashira. 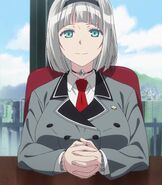 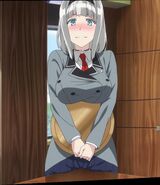 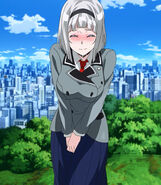 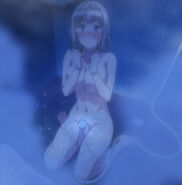 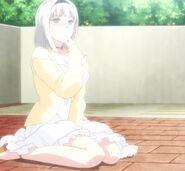 Add a photo to this gallery

Retrieved from "https://shimoneta.fandom.com/wiki/Anna_Nishikinomiya?oldid=1776"
Community content is available under CC-BY-SA unless otherwise noted.