Hyouka Fuwa's main feature is her messy, green hair. This feature is complemented by her purple eyes and deep bags under her eyes. Her fashion consists of a long, white lab coat on top of her school uniform, but she has been known to wear just her school uniform on occasion.

She is a quirky and deadpan girl who is often very quiet and anti-social. It is also safe to assume that she spends most of her time in her laboratory, which is evidenced by her slender (almost starving) frame and deep bags under her eyes. She is obsessed with studying how organisms reproduce, as shown through her constant research of insects during sex, and how she is always asking Tanukichi to confirm her hypotheses.

Details of Hyouka Fuwa's background are not known, however she stands out from the other students due to her role as an independent researcher at the high school and role in the outcome in certain plot points.

Did you know: She's a secret member of a society. 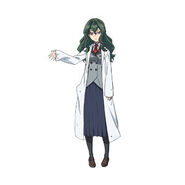 Hyouka Fuwa on Tanukichi crotch.
Add a photo to this gallery

Retrieved from "https://shimoneta.fandom.com/wiki/Hyouka_Fuwa?oldid=1815"
Community content is available under CC-BY-SA unless otherwise noted.